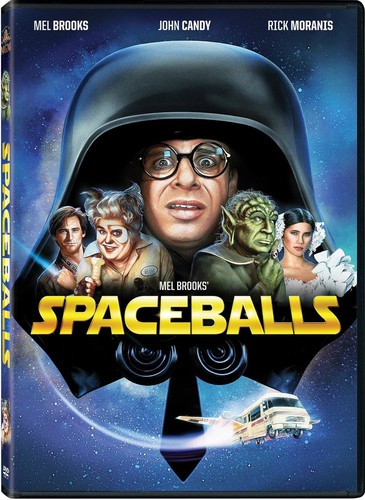 A space bum helps rescue a princess from an evil overlord with the help of a benevolent elder in this Star Wars send-up written and directed by Mel Brooks. Lone Starr Bill Pullman and his half-man, half-dog co-pilot, Barf the Mawg John Candy, are content to scour the galaxy living the easy life. But they reluctantly come to the rescue when Druish Princess Vespa Daphne Zuniga is threatened by the evil Lord Dark Helmet Rick Moranis, who wants to steal all of the air from her planet, Druidia. Trapped on a harsh desert world with Vespa and her robot chaperone, Dot Matrix voice of Joan Rivers, Lone Starr and Barf are helpless to prevent Helmet from kidnapping the girl. But assistance arrives in the form of Yogurt Brooks, a wizard who turns Lone Starr on to a mysterious power known as The Schwartz.

Catching up with Helmet just as he's transforming his spaceship into a giant vacuum cleaner in orbit around Druidia, the reluctant heroes stage a dramatic showdown. Although it borrows most of its plot from the Star Wars series, Spaceballs also pokes fun at Star Trek, Snow White, and Planet of the Apes -- as well as the entire videocassette and movie marketing industries. The large supporting cast includes Dick Van Patten, Jim J. Bullock, and the voice of Dom DeLuise. John Hurt makes a cameo in a parody of the exploding chest scene he played in Alien.